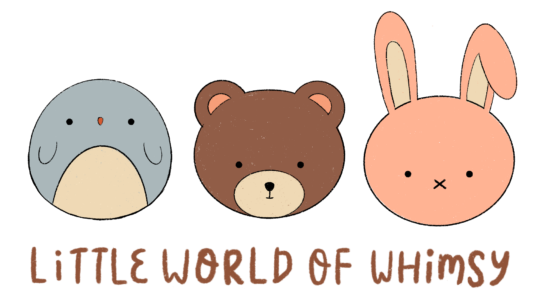 If you spend a little too much of your time making amigurumi like I do, then you’re probably also pretty invested in making your amigurumi project look as cute as possible. So besides the yarn, hooks, and notions, what goes into that elusive cute factor?

If you spend a little too much of your time making amigurumi like I do, then you’re probably also pretty invested in making your amigurumi project cuter. So besides the yarn, hooks, and notions, what goes into that elusive cute factor?

The best techniques to make amigurumi cuter are to use a tight tension, size down the crochet hook, and use baby-like proportions when structuring the body. For the faces, indent the eyes for a more lifelike facial structure, embroider eyelashes, and add blush. These elements all enhance the cuteness of an amigurumi and are relatively easy to accomplish.

As I design amigurumi patterns I’m always very curious and attentive as to how I can make it as cute as possible. So after much trial and error, as well as some online research, I’m here to share with you what I’ve learned from my hands-on experience.

Whether you’re an amigurumi designer or just trying to make some tweaks on a pattern you’re following, these are all great tips that will up your amigurumi game!

This might be the biggest one! I’ve often noticed that certain body proportions look cuter to me than others, but when I tried to create my own amigurumi I had a hard time nailing down what exactly those measurements were.

After doing some research, I learned that the more something resembles a human baby, the cuter it seems to us. This structure was coined the “baby schema” by Austrian ethologist Konrad Lorenz in a 1943 paper, because most things that look cute follow the body proportions of a baby.

Basically, this means that the more your amigurumi looks like a baby, the cuter it’ll be. Here are some general guidelines on what that might mean:

Babies have giant heads, so supersized amigurumi heads will look cute too! So long as the head of your amigurumi is oversize—that is, bigger than would be realistic, then it will look cute.

I find that good ratios of size of head to size of doll are a third or one half. I personally really like the look of amigurumi that are almost half or half of the entire doll size. This means that the head portion will roughly be the same size as the body portion.

As an example of this rule being used in action, here’s my Kitsune the Fox Girl doll:

As you can see, the head of this doll is roughly half the size of the body—and it’s super cute! (At least, in my very biased point of view xD). I probably wouldn’t make the doll head too much larger than this, relative to the body, but it’s still possible.

However, there are no definite rules, and this is merely a guideline to follow. Anything oversized will help your amigurumi look cuter, and there’s no need to break out a measuring tape. Usually, trial and error is your best friend in seeing whether you like certain proportions or not. There’s no right or wrong answer!

Another major part of “baby schema” is the oversize forehead that babies have. This means that their eyes are usually a little lower on their faces because of that oversize cranium.

To translate that into amigurumi terms, make sure that when you’re placing the eyes on your amigurumi, put them at least halfway down the head. I usually try for the two thirds of the way down the face, but anywhere between those two measurements should work.

His eyes are positioned about two thirds down his face. I’ve also used a red line to show the range that I would experiment in to decide where to put his eyes—the red line is the portion between one half and two thirds!

Bigger eyes are better in the world of amigurumi. Because they resemble babies’ eyes, round, large eyes are great to make your amigurumi look cuter.

When choosing what size eyes to put on your amigurumi, make sure to steer clear of the lower threshold. This might make your amigurumi’s eyes look beady and small—the opposite of what you’re looking for!

Crocheting amigurumi can often result in unintentional gappiness between crochet stitches, or holes in the the fabric. This can frequently happen because using the hook size recommended by any given ball of yarn does not work for amigurumi.

Those recommendations on yarn labels are usually for garments, where gaps or somewhat looser crochet fabric is acceptable and desired. After all, who wants to wear a scarf made of stiff, dense stitches?

However, this is exactly the kind of crochet fabric that is best for amigurumi. Since continuity and consistency matters a lot for stuffed animals and dolls, eliminating the holes is paramount.

This can be easily achieved in two ways:

When choosing your hook size, a good rule of thumb is to use a hook 0.5mm smaller than the one recommended on the label, or the smallest in the range of options given. I usually use 2-2.5mm hooks for DK or light weight yarn, and 3-3.5mm for worsted weight yarn.

Increasing tension is also very important to make sure that the crochet fabric is dense. Make sure to pull tightly when crocheting to leave as few gaps as possible.

If you look at human eyes, then you’ll see that everyone’s eyes rest in a small indent on their faces. This is mostly because of the structure of the skull and eye socket, and can actually be replicated in amigurumi!

This technique of indenting amigurumi eyes is super simple and adds a cute touch to your amigurumi that can otherwise be hard to pinpoint. Here’s a great tutorial I found online explaining the method:

I love how this technique elevates amigurumi to higher level and adds a touch of professionalism and of course, adorableness!

Make your crochet eyes cuter by embroidering eyelashes behind the safety eye. This method can help with the first tip (make larger eyes!) by helping make them stand out a little more.

All you need is some black embroidery thread and a thin tapestry needle. Here’s a quick tutorial to master the technique:

Adding blush to cheeks is another cute touch that’s super easy to execute. The main reason why this works so well is because babies have really squishy, chubby cheeks, and highlighting this feature on your amigurumi is a good way to boost the overall cuteness.

You can do this by embroidering two little lines under your amigurumi eyes, or you can use actual makeup (the cheap stuff is fine!).

This one might seem a little weird. Basically, small noses are seen as super cute on babies. Although you could replicate this by sewing a super tiny nose on your amigurumi, an easier (and quicker) option is to just get rid of the nose!

If you don’t believe that this won’t look weird, check this out:

Crazy, right? You would think that missing a nose would throw everything off, but it turns out that it’s totally fine. I actually originally did stitch a nose onto this doll, but it looked weird until I removed it.

Here’s another example where I did leave the nose on, and I think it looks better that way:

For the little prince, something about him made it so that the nose worked out.

Once again, there’s no hard and fast rule, just many options that you should experiment with to see what works best. Creating a face for your amigurumi can be unexpectedly challenging and often takes more time than I expect. However, if you keep these rules in mind, then it will be much easier to land on that placement that has that je-ne-sais-quoi about it.

I hope these tips were helpful! To save this for later, pin it here!

Here are some recent posts that you should check out:

Hi, I’m Julia! I design amigurumi patterns when I’m not indulging in a good book or listening to music. Read more about my story on my About Me page. Grab a cup of tea and let’s make something together!

Are you an avid crocheter? Earn money writing articles for Little World of Whimsy!More Information
+